Fairlight 2.0: This time I mean it

Or, the realisation you actually had the right idea ten years ago #

When I came back to narrow gauge modelling in 2006, my first attempt at a new 009 layout was of a preservation-era railway built into a set of Ikea Ivar shelves in our flat in St Leonards. We’ll skip through the next decade of changed minds, false starts, family dramas and house moves because in the end the appeal of that idea has never really gone away.

The railway was (not originally, but later would become so) the High Weald Light Railway, a 2’6″-ish gauge replacement for the Kent & East Sussex Railway that – in the mind of Dave Holman, it’s original creator – ran from Rye on the south coast up to Headcorn and Maidstone with branches to Hawkhurst and Cranbrook. His O-16.5 layout of Hawkhurst was featured in the Railway Modeller in 1991 and formed one of my key modelling inspirations. He later built another, Cranbrook, which I came to own for a while but never really ‘got’ either 7mm scale or the idea of maintaining and modifying someone else’s layout.

But the concept of the HWLR stayed with me, and in 2013 I posted a plan for a “New HWLR” layout in 009 which would replace Cranbrook in the office I worked from at the time.

Needless to say zero progress was ever made and after a change in work focus I gave up that office and no longer had a suitable space for a permanent layout until we moved house in early 2016. Recently I’ve been planning what to do next, and it turns out that “next” looks a lot like the original plan…

Still 009. Still the preservation era HWLR. Back to something that can be mounted on Ivar shelving, although now upgraded to the deeper 50cm version which has proved to be a better fit for the storage crates for Narrow Planet (not a consideration in 2006!). In it’s current configuration the shelving gives me up to a 2.9m / 9’6″ run at around 1.2m height, split into three sections between the uprights. Although more on that in a moment.

Phase 1 is going to be the main terminus of the preserved railway, stretching over 83cm and 42cm shelf modules. Although the shelves are robust I’m anticipating building on a separate baseboard that sits on top of them – on the older type of Ivar the shelves simply lifted off the uprights, but have recently been redesigned to now clip on more securely and the force needed to dismantle them would risk damage to a integrally constructed layout.

The trackplan here is essentially the same layout as the 2013 plan, although the smaller space means the entrance over the road bridge has been lost and sidings have been added to give loco facilities suitable for an established terminus. Points on the loop are Peco 18″ radius, with 12″ in the yard. As we’re in the modern era there could potentially be a museum element to this although I also like the idea of showing something under construction.

I had thought there would be room for a town scene here too but on reflection I’m going to keep it fairly open and focussed on the railway – perhaps as if the site is slightly removed from the town the line originally served.

Moving to the left there are two further 83cm sections. The first (i.e. middle) has taller uprights and further shelving above so seems to fit as a fiddle yard, initially serving only Phase 1. It could eventually run through to a second terminus on the left-most shelf section, representing the ‘other’ end of the railway. I’ve drawn in a train turntable which would be useful for storage and for potentially running each end of the layout as separate operation.

This is because initially I thought about having Phase 2 as a pre-preservation scene, so it was planned with a shorter loop and tighter 12″ points. At this end the focus would be on the town, with places like Hawkhurst and Burwash in mind.

(All of the plans above can be viewed at a larger size by clicking through to their Flickr pages.)

However I found I wasn’t happy with the more cramped nature of the shorter length and, given there is room in the garage for a further 42cm module to balance the two halves, decided to draw up a potential longer version taking the overall length to 3.3m / 10′ 10″.

In this configuration I would set both ends in the modern day, with a transfer ramp sneaking in to show how visiting stock arrives at the railway, but the town behind could be fairly timeless and serve as a backdrop for vintage services as well. Operation can now more easily be ‘somewhere to somewhere’ which really appeals to me in a model railway.

Whether I actually get as far as the full train turntable or just opt for a simpler fiddle yard remains to be seen, but there are plenty of other things to do first including this pair of ex-Meridian Models Bagnall open wagons which were assembled today in a few spare ten minute breaks during the day job. 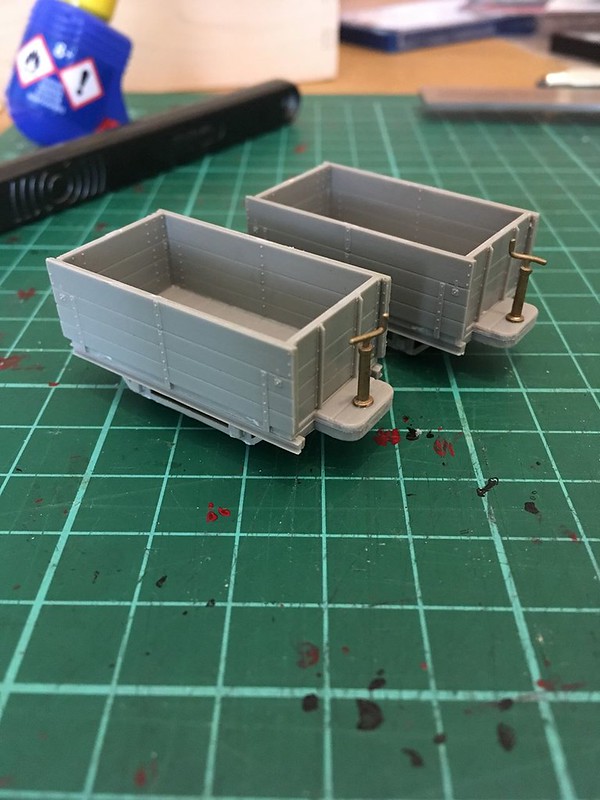 * Incidentally the O-16.5 layout Cranbrook is still in good hands and I believe is due to be exhibited at the Narr-O exhibition in Merstham on April 22nd.